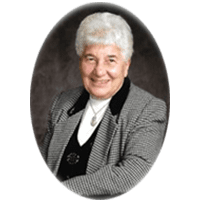 In John’s gospel there is an interesting comment that Jesus offers about the disciple Nathaniel.  Jesus says, “There is no guile in him.”  I believe that Jesus would say that of Sister Gervasi.

Josephine DiGregorio was one of six children born to Giovanni and Maria and with her four sisters and one brother was raised in the North End section of Boston. After completion of her studies at Girls’ High School and before entering the congregation, Gervasi worked as a bookkeeper and stenographer, skills which she maintained throughout her life. We are all familiar with her ability to use a computer and to share prayers and greetings with all of us.

In September 1942 Josephine DiGregorio entered the Sisters of St. Joseph and the following March received the unique name of Gervasi. It was fitting because Gervasi was a unique individual, as all would agree.

During her ministry Gervasi was primarily an educator, teaching in elementary schools in various parts of the diocese.  To this day her former students from Bradford recall her fondly.  Since her tenure in Bradford spanned the late forties and the fifties, we may rightfully assume that she certainly made an impression.   Gervasi was also a lifelong student, seeking to satisfy her curiosity about various subjects, earning certificates and credentials that expanded her horizon.  She continually reinvented herself.

After “retirement” Gervasi managed to keep a full and active ministry, visiting nursing and retirement homes, tutoring and serving as a substitute teacher for the Jackson and Montessori schools.  She believed that the day one stops learning is the day one begins to die; therefore, each year she tried to learn something she had never done before.

For the Sisters with whom she shared community life, the “Gervasi stories” are limitless. Gervasi was always up for an adventure at any time of the day or night: rowing on the Charles, a game of tennis in the backyard, a trip to Haverhill via Cohasset, a quick swim in the pool at Walnut Park.

Gervasi wrote the most hilarious skits for feast days and special occasions at Maria Convent. She always had a very imaginative part for each one of us (whether we wanted to do it or not).”

Among the items in Gervasi’s folder was an envelope titled My Legacy.  The envelope contained a number of statements that summed up her philosophy of life.  Most noteworthy to me, however, was the sticker used to seal the envelope. It stated “Dance to your own song”!  Gervasi certainly did that in life and we hope that her dancing continues through eternity.