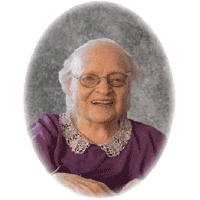 Mary Louise Mawn was born in Dorchester to Patrick and Rose Mawn, who were originally from County Leitrim, Ireland.  In the company of four brothers and one sister Mary Louise grew up in St. Ambrose and St. Brendan’s parishes.  Two years after graduating from St. Thomas High School in Jamaica Plain, Mary Louise entered the Congregation of the Sisters of St. Joseph, following in the footsteps of her older sister, Sister Modwena.

The early days of Mary Louise’s ministry were similar to those of most of the Sisters in that era, given to educating young children.  As one of the assignments that Mary Louise had, she spent sixteen years teaching at Sacred Heart School in Newton, where she influenced the lives of students in fifth and sixth grades.  Years later, one of her former students recognized her picture on the cover of an issue of Connecting.  It was her smile that he recognized.  His letter to Mary Louise chronicled events of his life (His father had died when he was in the third grade, and while in Sister’s class, his mother was dying). However, he also credited her with giving him “a sense of the intellectual and spiritual foundation”, which never left him.

After thirty-five years of teaching and school administration, Mary Louise assumed the role of a student again to pursue studies in counseling and theology. At the universities of St. Louis and Notre Dame she earned credentials enabling her to minister as a chaplain in hospitals and hospice services.  Her quiet, gentle manner and ready smile provided an atmosphere of trust for those to whom she ministered.

Among the artifacts in Mary Louise’s folder is a brief poem, intended for the liturgy booklet for her funeral.  It invites us to consider what Mary Louise is now experiencing.

of stepping on the shore and finding it heaven;

of taking hold of a hand and finding it God’s hand;

of breathing new air and finding it celestial air;

of feeling invigorated and finding it immortality;

of passing from storm and tempest to an unknown calm;

of waking and finding it home!