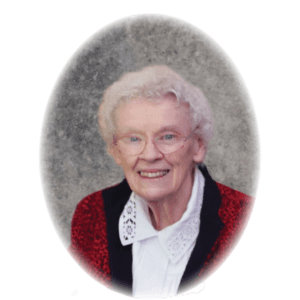 On the Sunday after Christmas, as I listened to Luke’s Gospel, it struck me how much the description of Simeon reminded me of Sister Mary Scanlon. Simeon was righteous and devout and the Holy Spirit was upon him, as was Mary Scanlon. As Simeon took Jesus into his arms and blessed God he said, “O Most High God – now let your servant depart in peace according to your word for my eyes have seen your salvation which you have prepared in the presence of all people” Mary and Joseph marveled at what was said about their son, Jesus.

On December 20, Sister Mary heard God call her to come to the place God had ready for her and she went peacefully to the God she served so well as a Sister of Saint Joseph. With her devoted sister, Sally, at her side and her dear sister, Barbara, waiting to welcome her, she departed in peace. And now we are left to mourn her loss but not without HOPE.

Mary was born to Patrick and Mary Scanlon and grew up in Norwood. She was the oldest of four children. With great joy, she welcomed her siblings, Barbara, James and Sally into the family.

Her ministries expanded to the whole Archdiocese of Boston: from Lynn, Charleston, East Weymouth, to Canton, Arlington, Haverhill, back to Arlington, where she spent 40 years at Arlington Catholic High School, as the longest-serving Sister of St. Joseph at the school.

And now, we are left, as Mary and Joseph were, to marvel at what is said about our sister, Mary Scanlon.

Mary educated and impacted the lives of thousands of students; she cared about and loved her students; she lived life well; she was selfless; she was dedicated to God and God’s children; she was a great math teacher and made math understandable to those who had a hard time with math.

Sister Cathy Clifford, who ministered with Sister Mary for 19 of Mary’s forty-plus years at Arlington Catholic High School, will now share her reflections of her years with Sister Mary.

What a privilege it is for me to talk with you about Sr. Mary Scanlon. Having worked with her for nineteen years at Arlington Catholic I feel that I can touch upon the woman she was and what she gave to others. In order to do justice to her, however, I’d like to share with you a poem that I think might give a picture of the woman we mourn and celebrate and give homage to today.

And so, the title of the poem is, On the Other Side of the Door and it is written by Jeff Moss.

As I think most of us know, Mary Scanlon taught math for most of her life. As a mathematician, she was precise, orderly and understood the concepts perfectly. Her classroom was like that as well, everything was pretty much in its rightful place, she used all the time allotted in a classroom period and with students who lacked her gifts and insights, she was infinitely patient.

However, at the end of the regular school day, students lined up outside her door seeking her help, some were her students and some were not. Sr. Mary stayed with them until each and everyone received whatever assistance they needed. Her manner, her welcoming, her invite to sit down and let’s work this out together sent a message that no matter who you are, where you come from or where you lie on the spectrum – you are always welcome on this side of the door.

As I think we all know, Sr. Mary didn’t talk a lot, she listened. I’m not sure that I ever heard her criticize anybody or say a bad word, but at this time of day, after school in this classroom, she spoke volumes. Pre-calculus and geometry might have been the topics, but wrapped around those subjects was kindness, compassion and welcoming. And, as the poem says, “everything can happen on the other side of the door” and for those students, many of whom went in confused but emerged with confidence, they were definitely transformed on that side of the door.

As I mentioned, Sr. Mary didn’t talk a lot and was rather humble, but she faithfully showed up at games, plays, events, etc., etc and was very much rewarded by the good behavior of those participants when they showed up in her classes! So, when her death was announced on the Arlington Catholic Facebook page – there was an immediate response from past students –

“RIP Sister “Truly the end of an era”

“She taught two generations of our family, may she rest in peace”

“May she rest in peace.  Such a great teacher.”

“Sr. Mary was an exceptional math teacher who truly cared about each and every one of her students.
Rest in peace after a life well lived.”

And so, here we are today, mourning and yet, celebrating that Sr. Mary Scanlon has now gone to the other side of the door, and that her God has welcomed her and assured her that she doesn’t have to go it alone; that she is being rewarded for all the goodness and kindness and faithfulness that she has shared with so many. What an example for us and for our lives. What a blessing to have known her. Thank you, Mary.