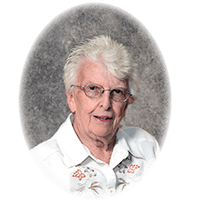 Sister Patricia McDonough, the beloved daughter of William and Mary Theresa, grew up in Arlington with her two sisters, Lizzie and Peg, and her two brothers, Bill and Paul. Legend has it that they were a force.

After a year at Regis, Pat entered the Sisters of St. Joseph in 1956 becoming Sister Paul Theresa. She taught at St. Clement in Somerville and St. Columbkille Brighton before furthering her studies toward a PhD.  which included a year in France. After teaching French at Regis, she became their Registrar until she retired in 2009.

Twice in her notes, Pat emphasized the word BRIEF for reflections so I’m treading lightly here.

Pat seemed a study in contrast – she was quiet but clearly a people person who loved a party.  She was reverent about what really matters, fidelity to her God, justice, relationships – but could be irreverent about the things that don’t matter. She was a great storyteller – and keeper of the stories.

She was brilliant and a hard worker – yet had a simplicity about her that was endearing.

In her application to religious life, Pat states her disposition as “fairly serious” – but she loved a good laugh – and her sister/neighbors at Dustin St., Joan and Jean, said they could often hear laughter coming from next door as Pat and Anno shared life with its unexpected bumps and joys.

To know Pat was to know her family, by name, and how much a part of her life and her happiness they were. McDonough pride.

Pat wanted this remembrance of her life to be joyful. She wrote JOYFUL twice too. Resurrection was her theme and the belief she held onto, lived, and cherished. All of life is a movement toward ONENESS. In this Oneness, there is no separation. She is in God, as we are. Together, differently, but still united – forever.