in the rustling of the leaves

and in the beauty of autumn.

Sister Rita Virginia McCarthy (Sister Mary Magdala), the daughter of John and Helen Madden McCarthy, grew up in Charlestown and Medford, with her eight siblings, Helen, John, J. Russell, Robert, Thomas, Donald, William, and Maureen — her baby sister, who was born after she entered. After working several years post high school graduation, Rita joined the party of 1944 at the age of 21.

She taught elementary school at St. Joseph Lynn, Jr. High and High School at St. James in Haverhill before teaching at Aquinas Jr. College in both Newton and Milton. In the late sixties, early seventies, Rita, like some other sisters at that time, began to work in the courts, advocating for and supporting adolescents who were having difficulty navigating home and school. 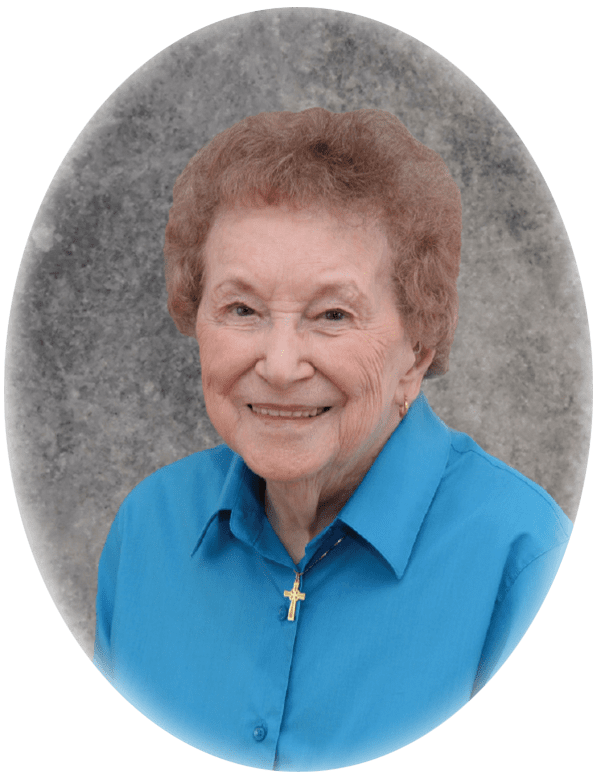 Due to her reputation as a dedicated and exemplary advocate, Rita received a call from Judge Prince, requesting that she open a home for girls who had no other options for housing due to the closing of many institutions. After careful discernment, Rita and Marie Connolly accepted this invitation, desiring to create a home where these girls could find safety, acceptance, love and guidance.

At the Quincy Group Home, where they ministered for 19 years, Rita and Marie impacted so positively many, many young women, changing the trajectory of their lives. In our tradition as Sisters of St. Joseph, we are called to be a healing presence, rooted in the example of Jesus, who walked with those on the margins and invited them to a fullness of life, where possibility and hope resided. Rita was so faithful to this call, in each of her ministries – in the classroom, the courts, the group home, with all the adolescents she encountered, and in the archdiocese. She brought light, healing and hope to those who experienced darkness for multiple reasons.

As a woman, as a Sister of St. Joseph, whose life was deeply rooted in prayer, Rita lived out of that truth – that dignity is for everyone, as well as is a sense of belonging and wholeness. This was how she understood her God and she responded wholeheartedly in the way she related to others. She lived faithfully as a Sister of St. Joseph, as a sister and aunt to her McCarthy family, and as a friend to so many, particularly to her co-minister and dear friend, Marie.

She has returned now to the God, from whom she was never separated, but now lives in a new fullness.

We thank our God for the gift and witness of her life among us, and we pray to follow her example of loving out loud wherever we find ourselves.