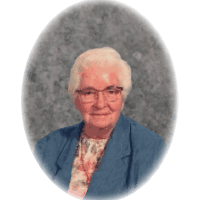 “We see relationship at the heart of mission… a sentence from our Constitution that is printed on the front of the liturgical booklet.    If we add to that sentence a phrase attributed to St. Catherine of Avila, “Stretch the boundaries of love,” these two sentiments may give us an insight into who Sister Sebastian Finnity was as a Sister of St. Joseph of Boston.

I had the privilege and delight of living with Sister Sebastian at Marian High School convent. We both slept on the third floor of the convent. Very early in the morning I would hear Sister Sebastian swiftly walking down the stairs for Mass and then to school so she would be there before the teachers and students.  She had taken it upon herself to plug in the coffee and open the Book Store, so everything would be in readiness for the faculty and students when they arrived.

As the school day progressed, Sister Sebastian would leave the bookstore and relocate into a classroom.  She taught the typing classes. The students loved the manner in which she taught! This skill was achieved from her earlier years as an elementary, secondary teacher and business teacher at the various parish schools within the Archdiocese of Boston where she ministered. As an educator, Sister Sebastian was observed to be strict in her discipline, but amply knowledgeable regarding her teaching syllabus.

In time, Sister Sebastian’s talents were recognized beyond her classrooms. The Jesuits hired her and were delighted for eleven years to have Sister Sebastian as their Executive Secretary of Eastern Point Retreat House. Living in Gloucester, and according to God’s plan, Sister Sebastian was to team up with Sister Mitrina to become Director of Religious Education at Our Lady of Good Voyage Parish. What a team of Sisters of St. Joseph they made together! The residents of Gloucester witnessed not only the ministry of Sister Sebastian and Sister Mitrina, but they also identified that their canine companion would always be in their purview too.

From 1997 until 2012, Sister Sebastian called Gloucester home and utilized her gifts to serve the people of that town. When her ministry was deemed not viable for her to continue, God intervened. Together Sister Sebastian and Sister Mitrina left Gloucester and began their residence at Bethany Health Care Center where their loving friendship continued to flourish. In addition, as each of you who reside at Bethany know, Sister Mitrina was always watching out for Sister Sebastian making sure she had her books, jigsaw puzzles, and pictures of their beloved dogs visible in her room.

As a patient here at Bethany, Sister Sebastian immersed herself in the care and atmosphere on the fifth and second floors.  She had sudden quips to give to the nurses, particularly if she did not care for an activity or a routine within her care. However, for most of her days at Bethany Sister Sebastian’s gentle smile radiated from her face with gratitude and pleasure.

To say that Sister Sebastian was a prayerful woman would be an understatement.  Her preparations for her religious education ministry gave her spiritual knowledge that was sacred to her.  I believe within her prayer Sister internalized St. Paul’s words to the Colossians.  Sister Sebastian was a woman of compassion, kindness, and humility. She reflected on the word of God, internalized it and allowed it to dwell within her.   In her life, she not only spread that God’s word but also assimilated it within the charism of the Sisters of St. Joseph of Boston.

For the past few months, God has been voicing his call to Sr. Sebastian. During these moments, I believe Sister spent time in her own way reflecting on Jesus’ promise to prepare an eternal dwelling place for her.   Thus, this call came to Sister Sebastian peacefully, in the silence of the early morning last Wednesday.   God’s loving voice called Sister Sebastian. “Come – accept and possess your eternal  reward. You stretched your love unselfishly and established relationships with many “dear neighbors”, as you ministered to their individual needs.

In 1939 Sister Sebastian – Margaret Finnity left her parents and two sisters in Jamaica Plain to minister in God’s vineyard.  Our gratitude to her family for the gift of your Aunt – Sister Sebastian to us.  For seventy- nine years, Sister Sebastian Finnity served God’s people as a Sister of St. Joseph of Boston. We the Sisters of St. Joseph are grateful for her dedication and service in our Congregation. May she now rest in peace.