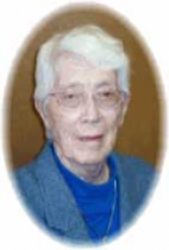 Sister Stella Sabini – Katherine Sabini, born in South Carolina, arrived in Massachusetts in a unique way not journeyed by many of us. She was the daughter of a military man. Her father’s assignments caused the Sabini family to move as far away as Asia, to the Philippines, and after various geographical assignments in the United States, the family settle in Massachusetts, where Sister Stella attended Mount St. Joseph Academy as a Senior. Perhaps this was the location that Sr. Stella met the Sisters of St. Joseph of Boston to whom she became so enamored!

If we are this morning to describe Sister Stella Sabini as a Sister of St. Joseph, a reflection of our Constitutions from the section on Mission would come to mind.” As women entrusted with the mission of reconciliation, we devote our life and work to realizing the prayer of Christ: that all may be one with God and with one another.”  Sister Stella Sabini entered the Congregation on February 2, 1938 and had the dream of fulfilling her religious life as a Sisters of St. Joseph of Boston. Her ministry throughout her years was that of educator, serving within the Catholic School system of the Archdiocese of Boston. Sister Stella’s ministry began as a teacher of junior high students, and emerged as an instructor to the level of high school.  In 1967 Sister Stella was appointed by the Congregation to be the Principal of Fontbonne Academy. Throughout her past years as academic leader, Sister Stella had continuously pursued excellence as her goal, not only for herself, but for her students. She strongly encouraged them to seek this virtue, as well as to strive toward their potential, realizing this was their gift from God. It was at Fontbonne Academy towards this intent of providing quality education for students, that Stella introduced the Lloyd Trump Program.This syllabus was an innovated approach to teaching for the faculty, as well as a new style of learning for the girls at the Academy.

The readings chosen for the Liturgy this morning reflect Sister Stella’s values and her desire to fulfill our charism. Isaiah tells us not to fear. God has called you by name. Sister Stella Sabini knew God called her, loved her, and gave her the grace to pursue her educational endeavors. In Timothy letter he says, “Fan your flame – (but) not with a spirit of timidity”. This was a thrust for Sister Stella. Within her lifespan she attended progressive education at the university level in the fields of theology, religious education and foreign language. With her enriched knowledge she tutored students and even shared new viewpoints with the personnel as the Coordinator of the Syrian Association Charity. In 1980 Sister Stella ventured to join the Department of Revenue for two years as one of their Assessors.

St. Matthew proclaims in his Gospel, “Give light to all- shine light on others”. Throughout her years of formal ministry Sister Stella Sabini answered the needs of the dear neighbor with determination and dedication. In her later years in Bethany, Sister Stella attempted to adjust to this new residence as well as to the nurses and staff that cared for her.Sitting with Sister Stella in her bedroom the day she died, I observed the nurses on the second floor constantly assisting Stella medically in her preparation to meet her God. Surrounding her around her bedroom were some mementos from those who loved her dearly.Though not conscious in her bed, I believe Sister Stella was aware of her God inviting her to her eternal reward. Truly I believe she knew as a Sister of St. Joseph, she had tried to realize the prayer of Christ and endeavored in her ministry to call her students and colleagues to “be with God and one another”.

May you, Sister Stella Sabini, rest in the peace God has prepared for you, and enjoy a reunion with your dear friend, Sister Roger. We, the Sisters of St. Joseph of Boston, celebrate your 77 years of life as a religious woman of the church. May our loving God, who chose Sister Stella Sabini as his own in Baptism, and by religious profession as a Sister of St. Joseph, now, enfold her in the peace and joy of eternal life.