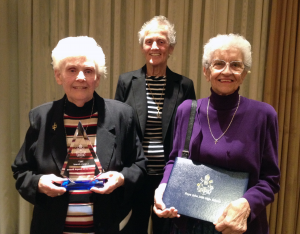 Celebrating Commuity, Commitment & Legacy – On Thursday, April 27th, the Pope John XXIII High School community came together for the 10th annual Pinnacle Awards Gala at Spinelli’s on Route One in Lynnfield. Included in the gala tradition, each year, awards are presented to individuals or businesses that contribute and support the mission of Pope John XXIII High School. Award winners for 2017 were selected for their unwavering commitment and long-time relationships in the categories of Community Partnership, Athletic Achievement and Legacy. The final award of the evening honored the Sisters of St. Joseph. Nancy Brennan, CSJ, Lorraine Marie DiMare, CSJ, and Peggy Reavy, CSJ were all on hand to accept the award on behalf of the Sisters of St. Joseph, Boston. Alexis Scrima ’17 gave a brief history of how the sisters started in Boston in the mid-1800s with a mission of supporting the Irish immigrant population, opening schools for young girls, eventually including boys, and addressing the problem of homelessness in the city by providing a peaceful environment, comfort, security, companionship, shelter, and food. It was in 1966, along with Cardinal Cushing that the Sisters of St. Joseph opened Pope John XXIII High School to provide the greater Everett community with its own co-educational high school graduating their first class in 1970. To celebrate this legacy, after honoring four graduates from the first class who still work at Pope John, the school invited the sisters back to credit the mission they pioneered of educating youth in excellence. Sister Peggy accepted the award on behalf of the order and received a standing ovation from the room.