Open Our Hearts, Open Our Arms, Open Doors in Welcome! 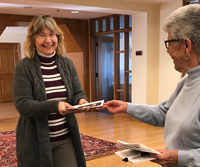 We welcome you to our prayer service for migrants and refugees during National Migration Week. Surely, at the current time in our country, both locally and nationally, there is a desperate need to stand with our migrant brothers and sisters. 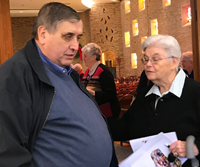 Pope Francis has called us to a two-year Global Migration Campaign called Share the Journey which was begun in September. He said, “We must strive and ask for the grace to create a culture of ENCOUNTER that restores to each person his or her own DIGNITY. Migrants are our brothers and sisters in search of a better life, far away from poverty, hunger, exploitation and the unjust distribution of the planet’s resources which are meant to be equitably shared by all.” 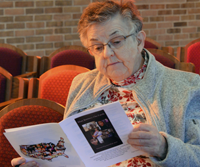 Pope Francis leads by example. He went to Lampedusa soon after hundreds of migrants drowned off its shore. He went to Greece, returning with three Syrian refugee families, bringing them to Rome, sharing meals at his home. On Holy Thursday he washed the feet of 12 refugees – Muslim, Hindu, Coptic Christian, and Catholic.

We are so aware of all that is happening in our country that is in need of our support.

We are called to “Open our hearts, open our arms, open our doors in welcome.”

by Mary Jane Cavallo, SNDdN
Today we celebrate the feast of Epiphany, the day Jesus is made known to the world. As I reflected about this feast, I wondered, “Why are we having this vigil? What has drawn us to this place, to this gathering?” It is because we believe, we have seen the star, the light who is Christ. 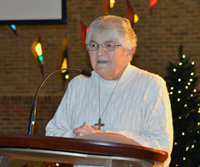 I am sure it would have been inviting to stay in our warm homes with a hot cup of tea. But we are here. We gather to remember, to pray, and to let our hearts be touched and moved to make a difference.

During this month dedicated to an awareness of human trafficking, we call to mind the millions of women, men, and children who are bought, sold, and exploited in sex and labor trafficking throughout the world. We need not go far to find victims. They are right here in our own neighborhoods.

We continue to follow the Star that leads us to the God who dwells within each of us, because in the end, it is all about God! 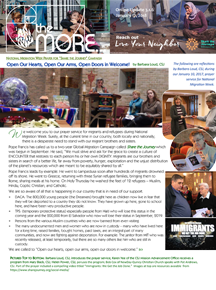