Founders’ Day 2020: Rooted in the Future 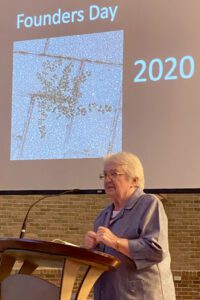 As we gathered to commemorate the 147th anniversary of our founding in Boston, Lee Hogan, CSJ, welcomed sisters in chapel and the viewing audience commenting, “It’s been a long time since March 14 when we celebrated St. Joseph day. We wanted to do something that would bring us together to celebrate our jubilarians and share a presentation about Founders’ Day.” Sister Lee also noted that, “The 37 sister jubilarians account for 2450 years of service in the Archdiocese of Boston. Pretty amazing!” 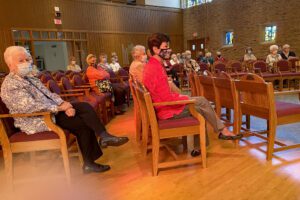 Pictured Above: Sisters who gathered in the Motherhouse Chapel, fully-masked and socially distanced.

Cathy Clifford, CSJ, invited us to “recall our founders their courage and the challenges they faced . . . join in prayer for the jubilarians who also have overcome challenges and provide us with gimmers hope, humor, and humility in the midst of darkness.” She went on to say, “we can feel paralyzed and distraught by all that is happening in our country and world, but today we hopefully will be reminded that others have faced all kinds of challenges: plagues, wars, disasters and they, like our jubilarians, responded willingly and generously and courageously.”

The CSJ Jubilarian slide show can be viewed at https://www.csjboston.org/who-we-are/jubilarians/

Our presentation, titled “Rooted in the Future” was created by Ann Grady, CSJ, and Judith Costello, CSJ, who had created similar opportunities during their years at Regis College. The above slide show can be viewed at https://youtu.be/2G3JUC7hKjo

Sister Lee began the presentation saying, “We gather to commemorate Founders’ Day, to honor those pioneer sisters to whom we trace our roots. In an age where society places great emphasis on knowing our ancestors in order to know ourselves better, we revisit our historical origins. . . . In telling our story, we bring to light the women who ‘have bequeathed to us a strong heritage: the courage to respond in the most difficult situation, the humility to let God be with people through us, the fidelity to God and to one another from which we derive our strength.’” (Constitution, p.17) 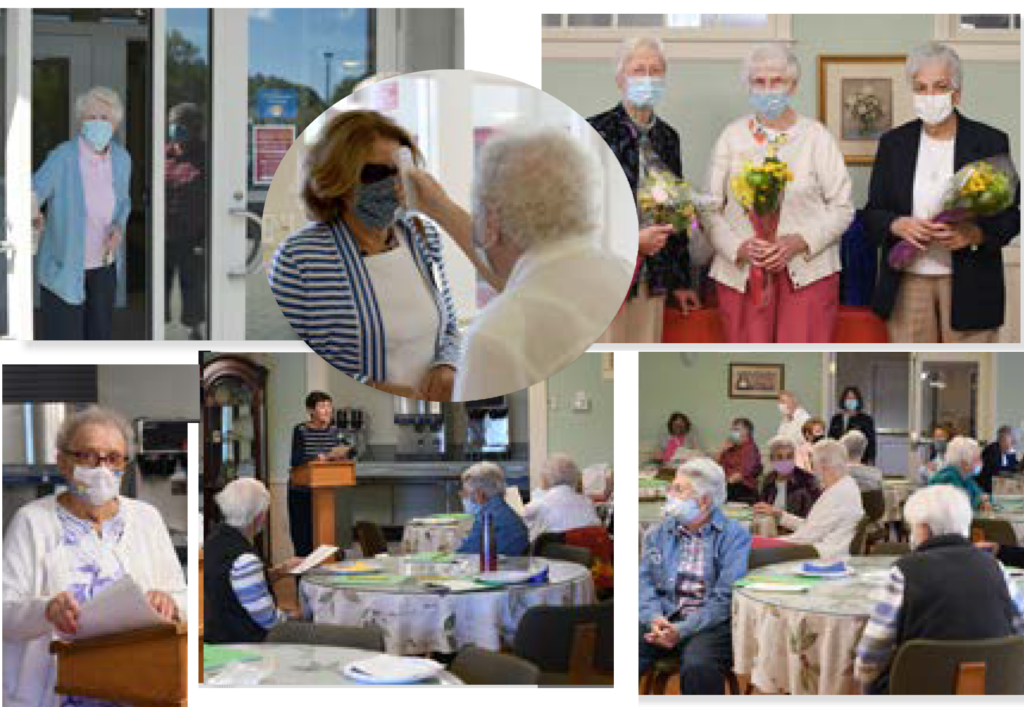 On Monday, October 21, 2020, sisters and associates gathered to celebrate a ministry they all share. The joy and happiness is evident as they greeted one another and chatted before the program began. The CSJ Community Councilors expressed their gratitude and appreciation to the drivers for their time and commitment to the CSJ Transportation Ministry.
In her opening prayer, Betsy Conway, CSJ, said that by saying yes to the Transportation Ministry, the blessing each sister’s presence offers is so much more than a ride. Their response to this ministry to our sisters is a gift of love.
Judy Costello, CSJ, gave warm words of welcome, expressing gratitude to the drivers for their commitment, their gift of time, energy, and willingness to go the extra mile.
Mary Hanlon, the community nurse, addressed the current situation regarding Covid-19. She reviewed the driver guidelines, reminding everyone of the importance of wearing masks and social distancing.
Denise Kelly, CSJ, presented flowers to Roberta Ristuccia, CSJ, Gail Ripley, CSJ, and Helen Sullivan, CSJ, for their eight years of service to the program. She thanked them for their many years of driving and expressed gratitude for their being part of the initial group in the program.

Pat Andrews, CSJ and the Sisters of St. Joseph Recognized 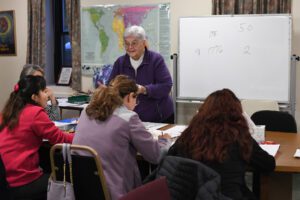 Artifact of the Month – Part 2
by Katie McNally, CSJ Archivist

The first weekend in October marks the 147th anniversary of the foundation of the Sisters of Saint Joseph in Jamaica Plain. The founding Sisters left their home in New York to serve a need in Boston: to provide faith-based education to the growing Catholic parishes in the Boston area. While not all people in the Boston area were appreciative of the establishment of parochial schools, the sentiment from the Catholic immigrant community which the Sisters served was that of a warm welcome. Margaret Higgins, once a student at St. Thomas Aquinas1, told of her father who owned a fish store in Jamaica Plain at the time of the Sisters’ arrival:

“My father was quite pleased – and everybody was in the parish – that the nuns were arriving.
So every Friday after they arrived he would send down a large container of oysters and a container of clams”2…

Warm clam chowder and oyster stew marked the beginning of the Sisters’ ministry in Boston.

The artifact below is another gift to the Sisters: a rectangular plaque of silver. It was offered as a “Testimonial of Esteem and Affection for Sisters of St. Joseph” on the occasion of their Silver Jubilee in 1898. Be it through silver or seafood, “Esteem and Affection” for the Sisters existed decades after their first arrival in the city.
On Founders’ Day, we celebrate not only the foundation in 1873, but all that has happened in the one hundred and forty-seven years since, because of that day. A group of just four women, responding to a need, committed themselves entirely to their new mission and influenced Catholic culture and education in Boston for years to come. 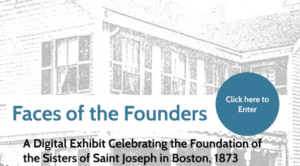 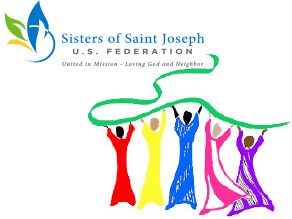 Associate News: Sharing of the Heart and the Order of the House
by Carole Anne Scott, CSJA
On October 1, 2020, the US Federation of the Sisters of St. Joseph hosted the second in a four-part series of Zoom workshops on behalf of their Associates’ Charism Companions Working Group. The workshop was titled “Why is Sharing of the Heart and the Order of the House so important to the Sisters/Associates of St. Joseph?”
Mary Ellen O’Connell, CSJ, and CSJ Associates Margaret Lelakes, Carole Anne Scott, Kathie Shute, Judy Swett, and Kathy Tighe were among those who participated.
Santa Marie Cuddihee, an associate from St. Louis, skillfully described these processes, both of which have been so vital, inspiring, community-building, and enriching throughout the history of the Congregation. Following her presentation, breakout sessions took place, allowing for a more spirited discussion and fostering new relationships. The organizers carefully diversified these groups so that they were comprised of people from different congregations or provinces.
The discussions centered on a reflection written by civil rights activist and faith leader, Valarie Kaur, about awe, wonder, and love. The reflection concluded with the following powerful statement: “. . . you don’t have to be religious in order to open to wonder. You only have to reclaim a sliver of what you once knew as a child. If you remember how to wonder, then you already have what you need to learn how to love.”
Participants shared what experience had recently caused them to feel that sense of wonder. Their reflections truly demonstrated why sharing the State of the Heart and the Order of the House is so essential. 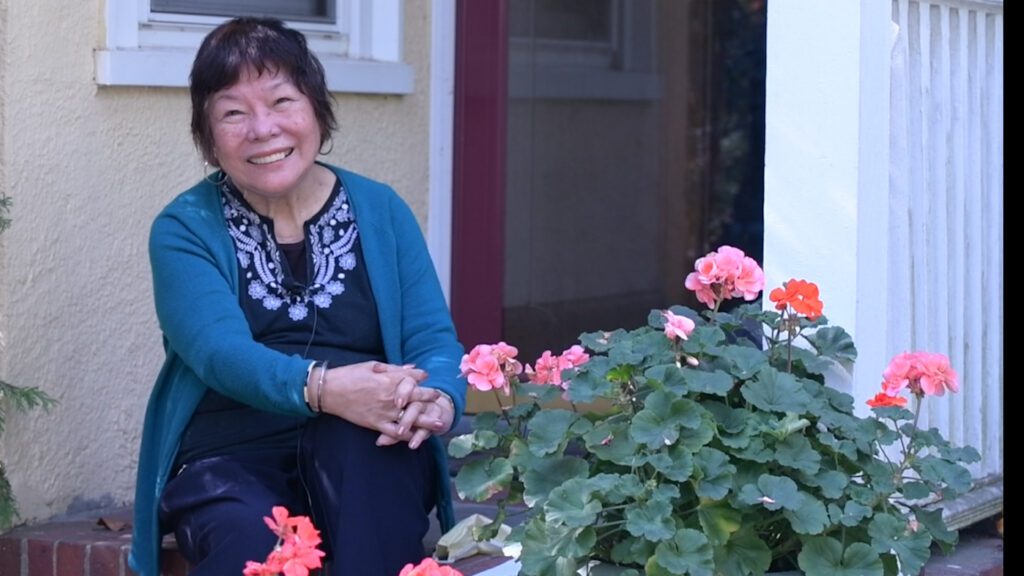 Love and service of the Dear Neighbor without Distinction has been a core value of the Sisters of St. Joseph since the beginning. During this autumn season we celebrate CSJ heritage moments on October 2 [Boston Founders’ Day in 1873] and October 15 [LePuy, France, Founders’ Day in 1650.] In preparation for these events, we asked some of our sisters, associates, agrégées, and partners in mission to tell how they live this core value.
Go to https://youtu.be/Z2sBUpdQNbY to view. 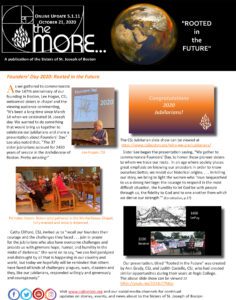