The U.S. Federation of the Sisters of St. Joseph Condemns the Ongoing Violence in Nicaragua 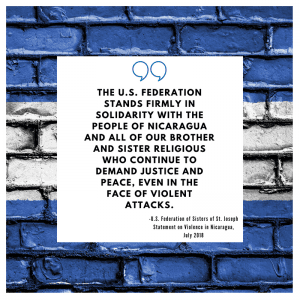 The U.S.  Federation of the Sisters of St. Joseph joins the Leadership Conference of Women Religious (LCWR) in their deep concern about the growing repression and state-sanctioned violence in Nicaragua.

Citizens’ voices have been silenced and their peaceful protests violently suppressed. Citizens — including campesinos and campesinas — doctors, students, religious, and clergy have been abducted, tortured, and killed.  The  UN High Commissioner for Human Rights, Zeid Ra’ad Al Hussein, reported that over a two- month period from mid-April to mid-June at least 178 people were killed, the vast majority at the hands of police forces and armed pro-government groups, and at least an additional 1,500 were wounded. We expect that those numbers have climbed significantly in the past weeks.

As a country that Sisters of St. Joseph have served in, we are horrified to hear of the injustices occurring against our “dear neighbors” in Nicaragua. The U.S. Federation stands firmly in solidarity with the people of Nicaragua and all of our brother and sister religious who continue to demand justice and peace, even in the face of violent attacks. We join with the Nicaraguan Catholic Church in denouncing the violence and with the first Latin American pope, Pope Francis, in calling for a return to dialogue that rejects violence and repression, respects freedom and reverences the lives of all. Finally, we pledge our prayer and promise that we will do all in our power to call attention to the injustice and violence being perpetrated against the people of Nicaragua.