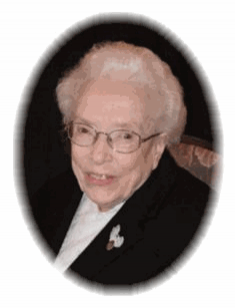 Sister Valentina Murray  was always so welcoming to people when they presented themselves to her. And so on Sunday, February 2nd, the Feast of the Presentation, in a peaceful, quiet moment God called and welcomed Sister Valentina to her eternal reward.
A Phrase from the Consensus Statement of our Constitution reads:

“The Sister of St. Joseph moves always toward the most profound love of God and love of neighbor without distinction”.

Sister Valentina or Val as she was affectionately known by most of our Congregation was a member of the Sisters of St. Joseph for 73 years having entered the Congregation from Neponset – St. Ann Parish on September 8, 1941.   Beginning from her entrance into the Congregation, Sister Valentina spent her entire life at the service of God’s people.   Her early years were spent as an elementary teacher in St. James Haverhill, St. Clement School and St. Benedict School in Somerville.  After completing studies for School Administration, Sister was appointed Principal in Holy Family Rockland.  In 1971 Sister Valentina was assigned to teach at Mount St. Joseph Academy.   Sister’s years spent  as an elementary  and high school  educator revealed creative and instructional skills which inspired her students to not only learn, but to internalize within themselves values and knowledge  that would enable them  to achieve success for  their adult  lives.  Sister expressed her love of teaching, displaying her delight to be in the classroom especially with the girls at the Mount.   As students from the Mount expressed, “Sister Valentina was full of joy …“I loved making her blush and giggle”.  “She had a contagious smile”.

In 1978 Sister Valentina was appointed as Administrator of the Motherhouse. The letter of her appointment from the Leadership Team stated: “This mission carries with it our conviction that your loving and competent service will enable our Motherhouse Community to continue the witness of religious hospitality that has had such a long tradition in our Congregation”.  It was at the Motherhouse that Sister Valentina (Val) remained as Administrator of the Motherhouse for twenty five years.   During those years she radiated a welcoming spirit not only to the Sisters of St. Joseph of Boston, but to other religious communities of women who sought residence there during the years they studied at the neighboring colleges and universities.       It was at the Motherhouse that many of Sister Valentina’s gifts, personality, and spirit were manifest.  It was also clear to all in residence there that Val was “in charge”. This was a hallmark of her life!  Val knew what she wanted and directed all her actions  toward sustaining  the Motherhouse to be a home for the Sisters who resided there. Val also demanded that it be a place that was always presentable!   As someone expressed it, Val was born to command!  I can remember being one of the Sisters who volunteered to set up the dining room for a feast day celebration, only to step into the Annex to see a table all set with silverware, cups, dishes and chairs in coordinating colors.    Val had set up a “mock table”. This was to be our “model” to copy as we set the tables in the adjacent dining room!   Dare I say, none of us, Sisters, dared to deviate from the “model”!

Working with her companion and dear friend, Sister Marie DeLourdes,  Val and Marie  used their  gifts and talents to serve the residents of the Motherhouse,  even it meant trips to hospitals because Sisters were sick ,  attending the Wake of a Sister’s family member ,  shopping trips to stores to satisfy a Sister’s “sweet tooth” or special need.   Their car was often seen in the Bethany parking lot as they visited Sisters who were former residents at the Motherhouse and now missioned to Bethany. They never wanted them to feel they were forgotten.  So for holydays and holidays they presented gifts many of which had been exquisitely wrapped by Sister Valentina.

Sister Valentina never ceased in her love and care for her family.   A story is told how she drove her Mother into Boston on Christmas Eve  to do shopping because  she had  broken  her wrist a few days before Christmas.  Spreading her love and concern to her siblings and their families, remembering them in prayer, and giving her words of wisdom to them were occasions that Val felt great delight.

However, as all of us must experience in our lifetime, transition came to Sister Valentina’s life.   The Motherhouse was being renovated.  Sister Valentina had to have a new home – Fontbonne Hall.   Life there was different in many ways.  She was not “in charge”.   Sister Valentina had always recognized her life as being one of service, so sometimes in sight of others, and often hidden from view, Val shared her gifts and talents to the Sisters and Administrators of Fontbonne Hall until 2007 when she was missioned to Bethany due to failing health.

With her aging in years and health altered Val had  more time to be intimate with her God,   I am sure Val reflected on the words of St. Paul to the Colossians.   This was a text which she had chosen as a reading for her 50th Jubilee Mass.  “As the Chosen of God, you are to be clothed in heartfelt compassion, kindness and humility…overall put on love.”    Now in her later years Sister Valentina attempted to deepen these virtues in her effort to adjust to the challenges in her life – her transfer within  Bethany from the top floors to the skilled nursing floor.    Often her words of gratitude were given to the nurses and staff for all the care she was receiving.  Her smile in later years was her attempt to react to the visitors who came to see her… her family, Sisters of St. Joseph, friends and especially, Sister Claire Morrissey.  In all these instances Val would always try to give a smile.

So now Sister Valentina, Val, is experiencing what Isaiah expressed in the Old Testament as God’s decree, “Do not fear, for Ihave redeemed you. I have called you by name, you are mine”.     I believe Sister Valentina heard God call her my name many times during her 91 years of life.      So on February 2nd, Jesus rewarded her by calling her on a special day… a day commemorating his presentation in the temple to his Father  to initiate his ministry of service.   I believe God is rewarding Sister Valentina now for her life of service to the dear neighbor, and her quest to be a Sister of St. Joseph who had profound love of God and one who loved without distinction.

Even this morning, Sister Valentina (Val) is still in control… she had three requests to her Area Councilor in 2004 –

Funeral Mass in the morning,

Father John Lavin, her cousin to say her Funeral Mass

Reflections from the Area Councilor

Memories from the Congregation…

So I now invite anyone who would like to share a memory of Sister Valentina to come to the podium.

May you Sister Valentina, Val, rest in the place God has prepared for you.   We the Sisters of St. Joseph celebrate your life and thank you for your presence in our lives.