Sisters of St. Joseph of BostonPress ReleasesFrom our Archives: A Vision for a More Equal and Just America – 50+Years Later 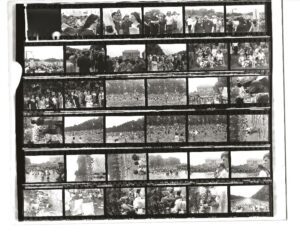 In 1968, Sisters of Saint Joseph of Boston participated in an historical movement: The  Poor People’s Campaign. This movement was “the next chapter” in Rev. Dr. Martin Luther King’s vision for a more equal and just America, as it expanded the focus of the Civil Rights Movement from desegregation and voting rights to economic justice.

Though King was assassinated a month prior, the campaign he began had become tangible during six weeks of marches on the National Mall in Washington, D.C. A reel of 16-millimeter photographic film in the Boston CSJ Archives shows one of these days of demonstrations from the point of view of the CSJ sisters who were there. 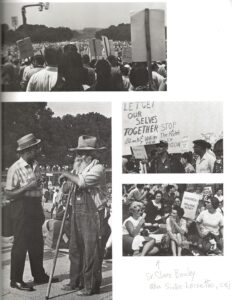 The march drew people from all over the United States – from both cities and rural towns.

The photographs walk us through details of the marches not always read about in classroom history books. A few shots capture “Resurrection City”, a spread of 3,000 tents erected to express the anti-poverty sentiments of the campaign and occupied the grounds around the National Mall for 42 days.

LET’S GET OURSELVES TOGETHER Black & White

Jobs or Income for ALL Americans Please

I have a dream: ONE America These

One sign in particular, appearing often alongside the sisters, reflects the contributions of Catholic nuns to the campaign. Corita Kent, then a Catholic nun and Warhol- inspired artist (and later the designer of the Rainbow Swash on Boston’s landmark gas tank off I-95), designed the silkscreen serigraph poster seen in the image on the right. In large print it reads: “god’s not dead he’s bread”. This poster includes the phrase, “they say the poor have it hard well the hardest thing they have is us”. It also includes a print of the New York Times article written by playwright Arthur Miller, “On the Shooting of Robert Kennedy”. This piece, written on June 8th of that year, laments the existence of a government that is unresponsive to what he calls “The Unanswered Poor”. 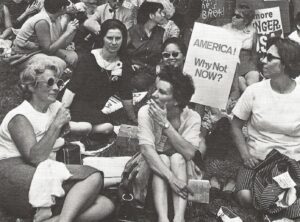 These photographs taken by CSJ sisters are incredibly rich primary sources, evidencing what the Poor People’s Campaign looked like and what it stood for. As we celebrate Black History Month in February, we recognize ways the Catholic Church and Catholic religious communities have participated in systemic racism and ostracized Black Catholics. We look to those in the past who chose a path of love instead as inspiration for us and a reminder of our need to actively participate in the ongoing work towards social and racial justice within our own communities.

How have I furthered our country’s movement
towards economic equality and racial justice?

What can I do to learn more about these issues
and help in this effort within my own community?